The "navel" of the Earth for the Ancient Greeks, is a world-wide known place of Ancient Greek civilization and the most visited site in Greece after the Acropolis of Athens.

► How to go: through Rio-Antirrio Bridgr (20 min.) you reach Itea on the north side of Corinthian Gulf. (+45 min.) From there Delphi is approximately another 45 min. far by car.

It is one of the most important and beautiful archeological places around Greece. In a green plain, surrounded by friendly mountains, a place of worldwide brilliancy and culture, the Ancient theatre at the side of mountain Kinortiou, the miracle of Epidavros, was built by the architect and sculptor Argous Poliklito the last. Every July music performances take place under the auspices of the Ministry of Development 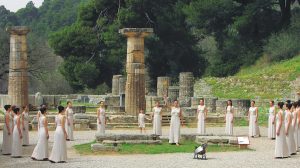 One of the most important sanctuaries of antiquity, dedicated to the father of the gods Olympian Zeus. Olympia is the birth-place of the Olympic Games and also where they were held.

►How to go: through Patra you follow the National Road going west to Amaliada ( 1 and a half hour), then southeast to Pyrgos (+45 min.) and from there to the east is the ancient Olympia (+30 min.)\

View all posts by: Xristos Mavrogiannis